The world population is continually growing at approximately 83 million per year. It reached 7.0 Billion in the year2011 and is estimated to reach 8.3 Billion in 2030, 9.8 Billion in 2050 and 11.2 Billion in the year 2100. According to United Nations population statistics, the world population grew by 30% or 1.6 Billion, in a twenty – year period between the year 1990 and year 2010. In terms of the number of people, the increase during the same period was the highest in India (350 Million) and China (196 Million). Among the most populous countries, population growth rate for Pakistan for the period 2010-2018 jumped to 19.74 % see Table 1.

Based on a research study by Pew Research Center of Washington D.C. the world’s Muslim population is expected to increase by about 1.97% per year in the next 20 years versus Christianity which is expected to increase at 1.32 % per year. If current trends continue, by 2070 or sooner, the world’s Muslim population will surpass Christianity, and Islam will become the largest religion in the world, insha’Allah.

(Rate is given as percent per year)

A population pie chart and bar diagrams for the world’s major religions for year 2015 are given below: 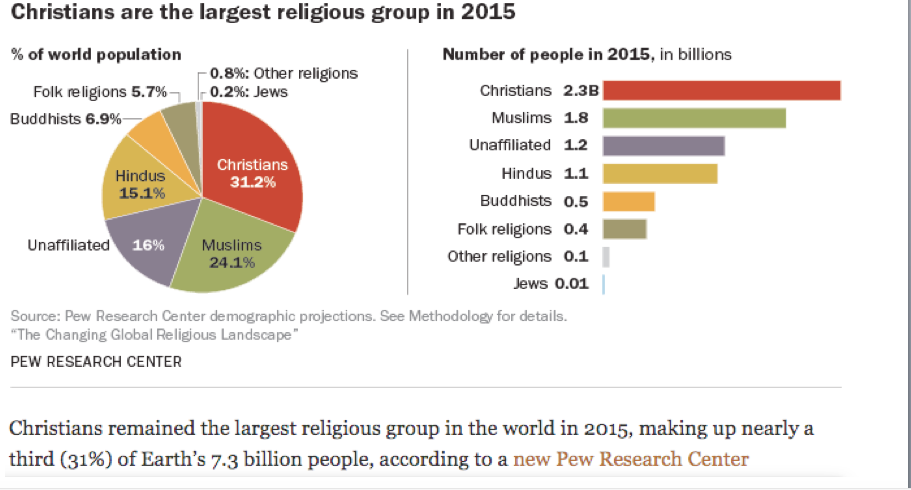 Based on the current population projections, about 79 countries will have a million or more Muslim inhabitants by the year 2030 compared to 72 countries in the year 2010. Pakistan is expected to surpass Indonesia as the country with the single largest Muslim population in 2030 according to the 2030 projected estimates by Pew Research Center, Washington DC, given below:

Eight Countries With the Projected Muslim Population by Year 2030:

According to PEW Reasearch Center, Washington D.C. if the current demographic trends continue, Islam will catch up with Christianity by middle of the 21st century. Between 2010 and 2050, the world’s total population is expected to rise from 6.9 Billion in 2010 to 9.3 Billion in 2050, a 35% increase. Over the same period, Muslims – comparatively a youthful population with high birth rates- are projected to increase by 73%. Following Table 4 provides a list of percentage of major religious groups.

The number of Christian population is also expected to rise, but somewhat slowly, at about the same rate (35%) as the increase in global population. As a result, by 2050 there will be near parity between Muslims(2.8 Billion, or 30% of the population) and Christians (2.9 Billion, or 31%) perhaps for the first time in history.

Muslims are the only major religious group projected to increase faster than the growth rate of world’s population as a whole. Table 4 includes a list of estimated change in population size of major religions during the period 2010 to 2050:

The population projections for the United States show that the number of Muslims will more than double by the Year 2030, rising from 2.6 million in 2010 to 6.3 million in 2030. Although several European countries will have substantially higher percentages of Muslims, the United States is projected to have a larger number of Muslims by 2030 than any European country except for Russia and France. In Europe as a whole, the Muslim population is projected to grow from 44 million in 2010 to 58 million in 2030. Several factors account for faster growth of Muslims than non-Muslims worldwide. Generally, Muslims have larger younger population, higher birth rate, and rising number of converts year after year. As per Wickipedia.org, every year about 20,000 converts accept Islam in the USA.

Islam is also the fastest-growing religion in Europe. According to the Pew Research Center, the Muslim population of Europe (excluding Turkey) was about 30 million in 1990, 44 million in 2010 and is expected to increase to 58 million by 2030; the Muslim share of the European population increased from 4.1% in 1990 to 6% in 2010 and is projected to continue to increase over the next 40 years, reaching as high as10% in 2050. In recent years, Europe has experienced a record influx of asylum seekers fleeing conflicts in Syria, Afghanistan, and Yemen. In the absence of any definite guidelines of accepting future influx of migrants, it has been extremely difficult for researchers to make accurate projections of future Muslim population in Europe. However, based on the moderate growth rate of new migrants in Europe, Muslims are projected to make up more than 10% of the total population in 10 European countries in 2030. These countries and the composition of Muslims in these countries are: Kosovo (93.5%), Albania (83.2%), Bosnia-Herzegovina (52.7%), Republic of Macedonia (40.3%), Montenegro (21.5%), Bulgaria (15.7%), France (10.3%) and Belgium and Georgia each over (10.%).

Islam is currently the largest religion in Asia. According to the Pew Research Center, in the Asia-Pacific region, in 2030, approximately 27.3% of their inhabitants will be Muslim, up from about a quarter (24.8%) in 2010. In India, Muslims are the fastest growing segment than any other religious population. Research has indicated growth rate of Muslims has been consistently higher than the growth rate of Hindus. In 2006, the then Indian Prime Minister Manmohan Singh had appointed a census committee which concluded that if the current population growth trend continues, by the end of the 21st century India’s Muslim population will reach about 340 million people (19% or 20% of India’s total projected population for the same period.

In China, Muslim population growth was estimated at 2.7% per year during 1964–1982, compared to the growth rate of 2.1% per year for the overall chinese population.

Converts also contribute to increase the growth rates for Islam. There are thousands of converts in Europe every year. As per the latest data for 2010, the number of converts in the United Kingdom and France have each exceeded 100,000 per year.

If the projection model is extended beyond 2050, the research would conclude that Muslim share of world population would equal up the Christian share roughly at 32 % each for the same time period between 2050 and Year 2070. After that, Islam, due to higher growth rate, will undoubtedly claim to be the largest religion of the world.

Within Islam, based on the latest available research, it can be concluded that Sunni Muslims will continue to make up an overwhelming majority of Muslims 85 to 90% whereas Shia Muslims will continue to make up 10% to 15%. Shia Muslims are growing at faster rate (2.4%) than the Sunni Muslims (2.1%). Among Sunni Muslims, growth rates are for Hanafi sect 2.1% , Shafi sect 2.2 %, Maliki sect 2.0 %, Humbli sect 2.2 %, and Wahabi sect 1.4%. Accordingly, by 2050 Shia population could rise to as high as 420 million.Shia and Sunni muslims appear to have more similarities than differences. Over 90% of their religious beliefs and practices appear to be the same. For example, they both (1) believe in the same Allah, (2) follow the same Quran, (3) believe in the same prophets,(4) keep similar fasts during the month of Ramadan, (5) perform the same Hajj or Umrah, (6) give a zakat of 2.5% of income every year, (7) perform the same five salaats every day. Additionally, Shias pay 20% Khums out of their annual savings.

Countries with Shia Population of 100,000 or More

Wahhabism / Salafism originated from fall of the Ottoman Empire. With the collapse of the Ottoman Empire, the Al Saud dynasty, and with it Wahhabism, spread to the holy cities of Mecca and Medina. Wahabis are engaged in destruction of Shia Holy Shrines, Mausoleum /Tombs and an ancient cemetery in Medina where four Shia Imams, Fatema Zehra (a.s.), the daughter of Holy Prophet Mohammed (pbuh), have been buried. Shia Muslims have been constantly protesting worldwide against these destructions and have been demanding Saudi Regime for immediate restoration and reconstruction of the Medina cemetery.

The Kingdom of Saudi Arabia is presently undergoing dramatic changes. The drive to modernize the kingdom and open it to the world is spearheaded by the young and ambitious Crown Prince Mohamed Bin Salman (MBS). He is seen as a mastermind behind the Riyadh’s strategy to revamp the Saudi economy and limit the power of clerics over state affairs. “We are returning to what we were before – a country of moderate Islam that is open to all religions and to the world” –Mohamed Bin Salman said to international investors in Riyadh in 2017. We certainly hope that MBS will succeed in his moderation plan.

Note: Please forward comments, if any, on the above Article to:  Shiayouth.org@gmail.com.